Relax and enjoy Italy, with its radiant sun and calm blue sea on a sailboat that takes you to beautiful destinations. 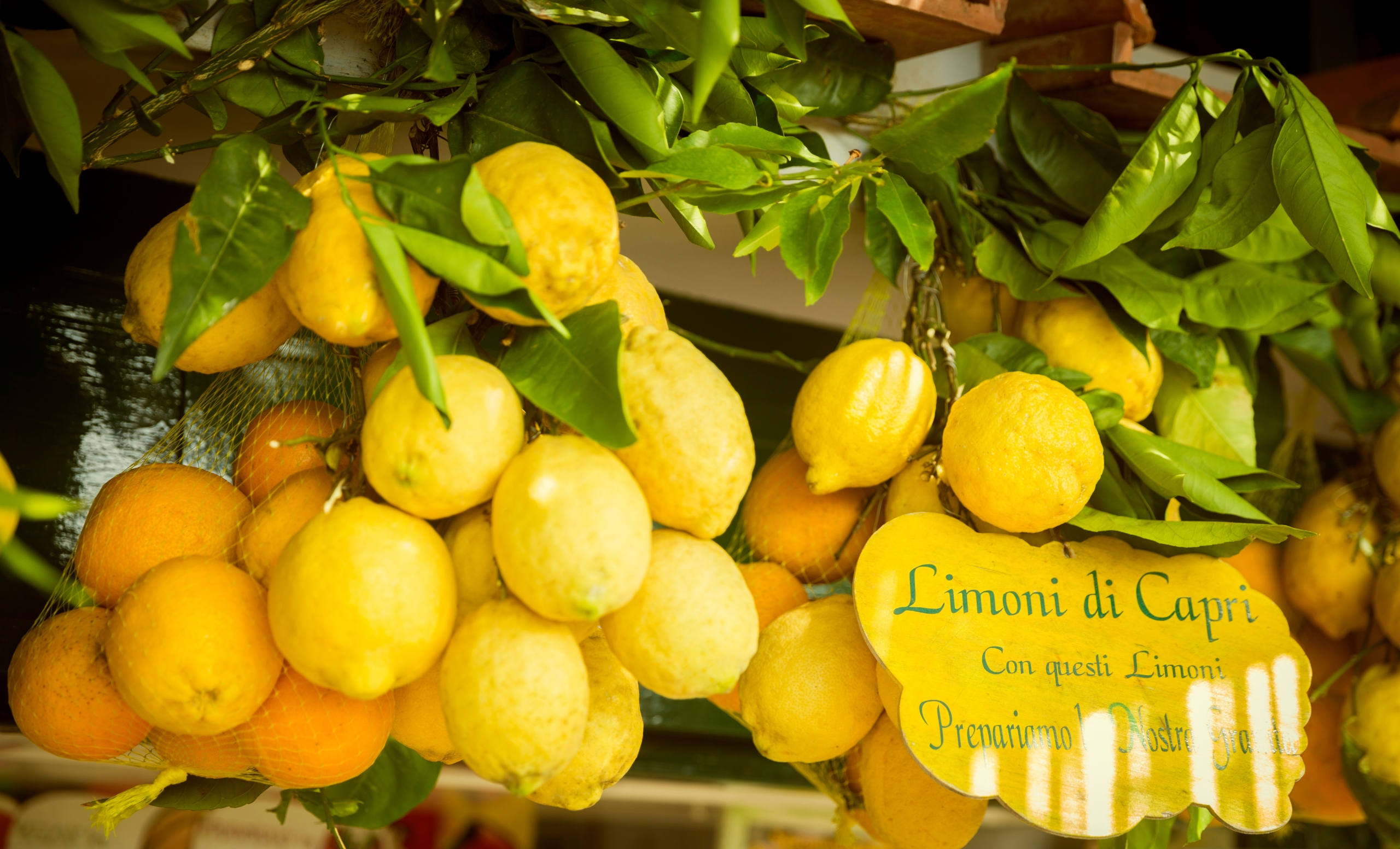 The fabled island of Capri is a giant tourist magnet. It is not simply a “Charter Capri” destination, as many people come out on the ferries to spend the day.

For many, the island is a “must see” and a trip of a lifetime. The island is a favourite among celebrities. Many of them spend their holiday on their enormous charter yachts with a captain and crew anchored in the bay of the Marina Piccola on Capri’s south side, or in the port of Marina Grande.

In the evenings, when day tourists have left the island, things quiet down. A visit to one of the island restaurants or clubs in the city of Capri is a unique experience. All framed by the well-kept houses and up-market shops, flowers and piazzas, and the views are breathtaking.

Capri was part of the Italian mainland 10,000 years ago, but then broke off and became one of the world’s most glamorous islands.

Anacapri, a small village further up on the island, can be reached along winding narrow streets. Here is the famous villa of San Michele, belonging to Swedish physician and author Axel Munthe. It is beautifully situated with impressive views.  The house is open to the public, including the room where Munthe entertained Queen Victoria of Sweden, as he was her personal physician. The site and the house is a highlight of any visit to Capri. 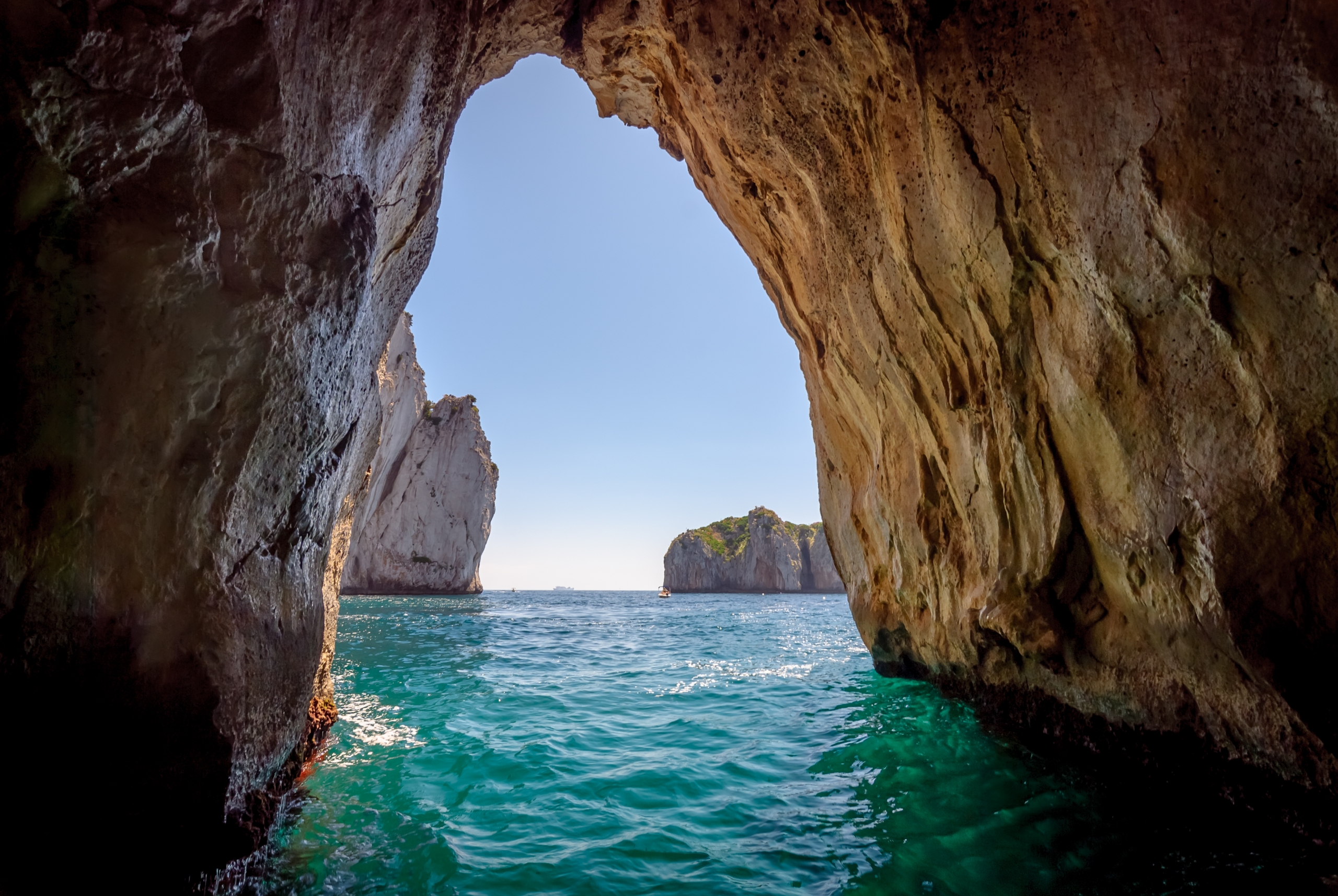 Places we take you!

Enjoy and relax in Italy with brilliant food, tranquil blue seas
and sailing that will bring you to beautiful destinations.

Learn more about sailing around Capri

Blue and green grottos can be found along the coastline of Capri. Outside, rowboats await, ready to row visitors through these caverns to enjoy the unique display of colours on the stone walls. These are reflections of the sun through the water and the narrow opening of the grotto. Charter Capri guests are offered safe tours of the grottos.

Another impressive sight is the gigantic rock formations of Faraglioni, which resemble the rauks on the island of Gotland. These are located south of Capri, and can only be viewed from the sea by boat.

They have been given three different names. One, called Stella, is attached to the island of Capri, and the other two are Faraglioni di Mezzo and Faraglione di Fuori. If you have a small boat and strong nerves, you can steer directly through a hole in one of the rocks, created by the waves of the sea.

If Capri is on your bucket list, book a Charter to Capri with SunByTheSea. A private yacht charter with S/Y Vanilla will take you out to any inlet you wish. A true sailing holiday with no other guests. Our charters to Capri include so much more. 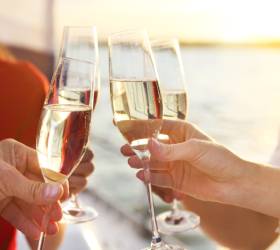 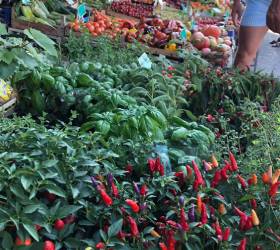 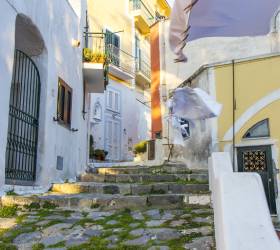 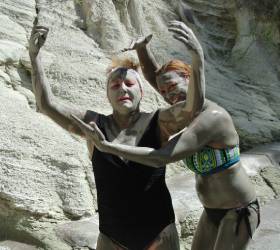 Summer sailing with a group of six friends from Sweden, July 2019

What a week we experienced! Sailing the salt sea outside Napoli visiting beautiful Islands such as Procida, Ischa, Ventotene and Capri was absolutely amazing. There is no better way to explore these surroundings than from the deck of Vanilla. During our six day stay, we got the chance to learn and develop our sailing skills, visit cute italian harbours, swim in the salt open water and eat wonderful meals served by our fantastic skipper, chef and host Per. He is truly amazing and made our stay unforgettable.

We had a wonderful week in the waters outside Naples

With skipper Per and his sailing boat Vanilla. The days were spent mostly out at sea with a cooling breeze that sailed us closer to the next cozy Italian village. When the heat peaked during midday we stopped to jump into the sea. In the afternoons we moored in small ports where the Italian island life was explored. We ate and spent a lot of time on the spacious Vanilla. Our skipper Per cooked delicious food and also learned our quite inexperienced group about the beauty of sailing. Per is so experienced and caring making us all feel super safe during the whole week. A trip with him gave us the best possible vacation week!!

Summer sailing with a group from Switerland, September 2017

One week on Vanilla, September 2017
If you like to experience sailing – as a sailor or not- in the waters of Naples and visit beautiful islands like Capri, Ischia, Ventotene and more, you just have to sign up with Per, the skipper and owner of the 54feet sailing boat S/Y “Vanilla” at www.SunByTheSea.se. Per is a Swedish “sea bear” with many years of experience in almost all waters of the world including big tough regattas around Australia and New Zeeland. Per, valuing security and safety highly, knows exactly what he is doing and there was not a second where we felt insecure even while sailing in up to three meters big waves. Per also showed his excellent teaching skills while training those who wanted know how to sail. Being an excellent cook in addition, Per spoiled us daily with breakfast, lunch and dinner, including drinks and cocktails before dinner, coffee and all we could think of. He asked us if we had any wishes concerning diet and succeeded in composing the most fresh, delicious, healthy and innovative food fitting our needs totally. There was no reason ever going to a restaurant at night- except for getting a real Italian Gelato- we were perfectly happy dining on board. We were always treated in a very friendly and personal way. There were enough of clean towels, sheets and basic toiletries available. The ship is was beautiful and in pristine condition. I can absolutely recommend this trip that gave us a truly relaxing and beautiful experience.

Exploring the stunning Mediterranean islands outside Naples (Tyrrhenian sea) onboard Vanilla was an unbelievable experience in all aspects. The boat is both spacious and well equipped, making the journey between the picturesque islands a pure pleasure.
We spent most of our days out at sea, stopping during the peak hours to cool down with a swim in the open water. We had both time to relax with a book in our hands as well as developing our sailing skills. After spending the days at sea, we moored in small ports as the afternoon turned to evening.
The skipper Per has more than one string to his bow, he is both an excellent teacher and can learn even the most inexperienced sailor the basics within a few days. He is also a master chef, preparing delicious meals all around the day with local and fresh ingredients. In addition, Per is incredibly service minded and respective to the wishes of the group.

Per is unbelievably warm-hearted and his constant effort to make our trip as authentic as possible truly made our stay unforgettable!

Great fun – Summer sailing with a group of seven friends

“Sailing for a week with Vanilla and Per was fantastic. The hospitality and the friendliness on the boat was amazing, and the host Per had everything under control during all time. The food we were provided was made with love, together with Italian ingredients that made every meal to an experience in itself.

The boat was big, spacious and well organized. We were a group of seven and we could easily fit. The area outside of Naples, Procida, Ischia and Capri, was beautiful and I would recommend everyone who wants to go sailing on the Mediterranean Sea to go here with Per and his boat. It was the highlight of the summer!”

I want to use the opportunity to thank you so much for these beautiful days, not only the weather (I am sure you have a secret connection some how) but you in person were simply great! You were the perfect host with a 5 star cuisine on a 2 sam kitchen size (I am still impressed).The dishes were not only delicious and really diverse but also proved that I may experiment a bit more and surprise my family. This birthday will for sure stick to my memory for ever! Thank you so much, you made it unforgettable!

Hoping to see you  soon again!

Our week at sea has been amazing in many ways! Our skipper almost suceeded to create a crew with us:-)
His patience and the time he always took to explain the how and the why made us be part of the whole experience.
The greatest and very unexpected surprise was the food!!! Absolutely delicious!
We even awarded Per with a Michelin star; nothing less!!!

We would recommend this trip for anyone loving to sail. The views of the islands from the water were breathtaking.
Thanks Per for this fabulous week!

“We are six sailing experienced Swedish gentlemen in our best years that in over 10 years have sailed together in different waters and with different types of yachts.
They’re usually 50 ft + why we of liability reasons, prefer to rent our boat with an experienced skipper.
This year was the second in the Mediterranean waters and I must say it turned out be one of the best. Why one might ask.
Well, first of all the ambience, the waters in and around Naples with islands like Capri, Procida, Ischia, Ventotene, etc together with the Amalfi coast is spectacular in beauty, culture and history.
Secondly, S/Y Vanilla is a 54 ft yacht built by Jeaneau that offers plenty of room for six crew and a captain. The yacht is in a very good condition, comfortable and immaculately clean.
The Captain Per is a skilled professional yachtsman. Safety conscious, good in planning routes in relation to wind/weather conditions and in accommodating his guests.
That leads me on to talk about the catering on board. The very same person turns out to be an excellent Chef as well.
We’ve been well dined and wined during our 5 days, including hearty breakfasts, lovely lunches served on deck and excellent evening meals all made up by fresh local produce.
Should one require a snack in-between the meals that would not be a problem.
In summary, we had a fantastic stay on S/Y Vanilla together with its Skipper Per that looked after us well yet maintaining his integrity.
Thank so much Per from all of us. Hope to see you and your yacht soon again.

What are you waiting for?

PRICE PER PERSON FROM €190/DAY
ALL INCLUSIVE

SunByTheSea AB is a small, private company that operates the sailing yacht S/Y Vanilla. Our business idea is to offer our customers the following:

Sail to various destinations in Italy, in your own floating hotel. Peaceful days at a slow pace, and a chance to live in the moment. Booking, check-in, transactions and check-out all through the same person. During these Covid times, your daily life will be private and adapted to your own wishes, and no outside contacts will be necessary during the journey.